On Wednesday, September 27 Council Members Mary Cheh and Charles Allen will hold a public roundtable on the implementation of Vision Zero. Below are my comments since I won’t be able to testify in person.

Due to schedule constraints, I am unable to testify at the Public Roundtable on the Implementation of the Vision Zero Initiative and the Bicycle and Pedestrian Safety Amendment Act of 2016 on September 27, 2018. I submit the following written testimony and hope if informs your discussions and decision making resulting from the roundtable.

When the Mayor announced the Vision Zero Initiative in 2015, I was enthusiastic. There was a lot of work to be done, but I believed declaring vulnerable road users the priority would lead to wholesale changes quickly in the city. There have been many successes since then, of course. I’m sure your government witnesses will highlight those, but I want to single out the Open Data work done by OCTO and data folks from the agencies. It’s simply outstanding and the folks at OCTO are incredibly responsive to issues I’ve encountered. Related, the number of geographic layers and geocoding of crashes and violations is simply outstanding and credit must go to the agency partners and their data folks.

With the niceties out of the way, I want to point out two glaring problems with the implementation of the two acts.

The first problem is easy to spot and easy to diagnose. In December of 2015, DDOT released proposed rule makings to implement further Vision Zero. After extending the comment period on that first rulemaking, DDOT didn’t release final rulemaking; instead, DDOT released a second rulemaking in January of 2017. DDOT twice extended the comment period on this second rulemaking and guess what happened next? Nothing. For almost three years, DDOT and the Mayor have refused to move forward on these critical rule changes.

So what happens when ANC 6B asks for the most dangerous two-way intersections to be converted? Traffic studies and pedestrian counts that say there’s not enough cross traffic for a four-way stop. But there’s less cross traffic because the intersections are dangerous. Anecdotes aren’t data, but on both bike and in a car, I avoid 12th/G St SE despite it potentially being a quicker route for some of my trips. This process repeats itself at 17th and A. At 10th and South Carolina. At 18th and East Capitol. At 16th and Massachusetts. At 5th and Independence. You get the idea.

I’ve used open data to determine the most dangerous intersections and have presented this data to DDOT. At the four-way intersections, by far the most with crashes in 6B is 17th and A streets SE with 52 crashes. The next closest was 35 crashes, at the four-way stop of 7th and E. 17th and A is a two-way stop. 17th and A is constantly cited by it’s SMD as the most dangerous intersection. 17th has speeding problems. This is not a complicated problem. Everyone will be safer with a four-way stop. Data shows this. But DDOT is unwilling to recognize this and fix this problem. If safety won’t be improved, DDOT should say this. But all we hear about is cross traffic and level of service and all sorts of things that make clear FHWA money and commuter times are priority number one and vulnerable road users aren’t. 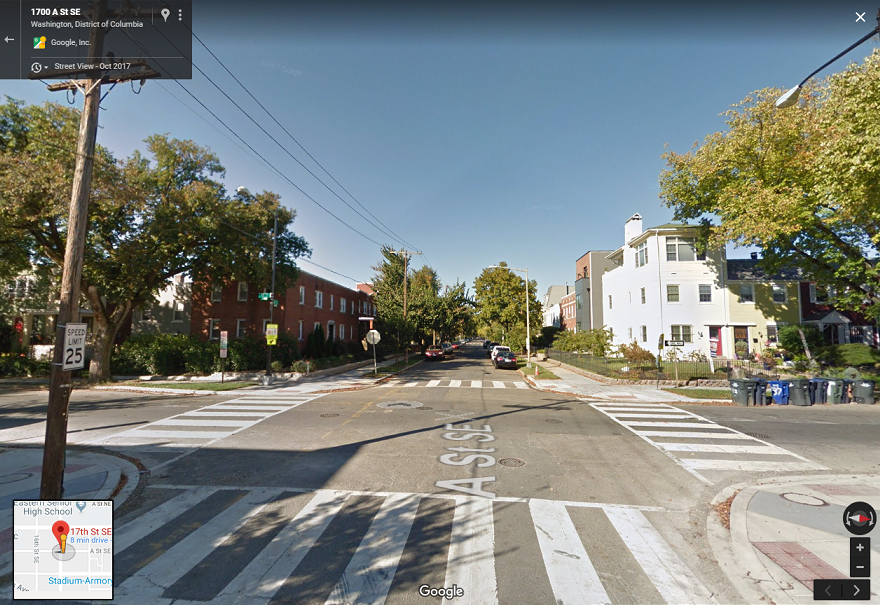 This is not to complain specifically about this intersection, but to show that the data portions of Vision Zero are working. The implementation is failing. I encourage you to bring this example up with your government witness and push them to use data to implement safety improvements.

Thank you for hosting this roundtable.