In the summer of 2018, ANC 6B’s Hill East Task Force and ANC 6B10 Commissioner Denise Krepp held a meeting with the Department of Public Works to discuss what she perceived as short comings with parking enforcement. To assist Commissioner Krepp, I used DC’s Open Data to put numbers and visualizations to the problem. As discussed in the Hill Rag, there was a huge spike in enforcement city-wide for most of calendar year 2016 and recent numbers were return to pre-spike levels. After the media attention, increased 311 requests for enforcement, and cajoling from elected officials, I was curious whether enforcement increased recently. Using newly released data for June-September 2018, it’s clear there was a small but noticeable increase in residential parking enforcement in Hill East. However, those increases were not visible across the city or in other parts of ANC 6B. It seems for all the attention, parking enforcement efforts were not increased, they were simply shifted to Hill East from elsewhere. (For all of this data, unless otherwisde noted, I will be talking about average number of non-ROSA tickets issued per non-holiday workdays per month. Enforcement is minimal on Saturday and relegated to MPD on Holidays and Sundays.). 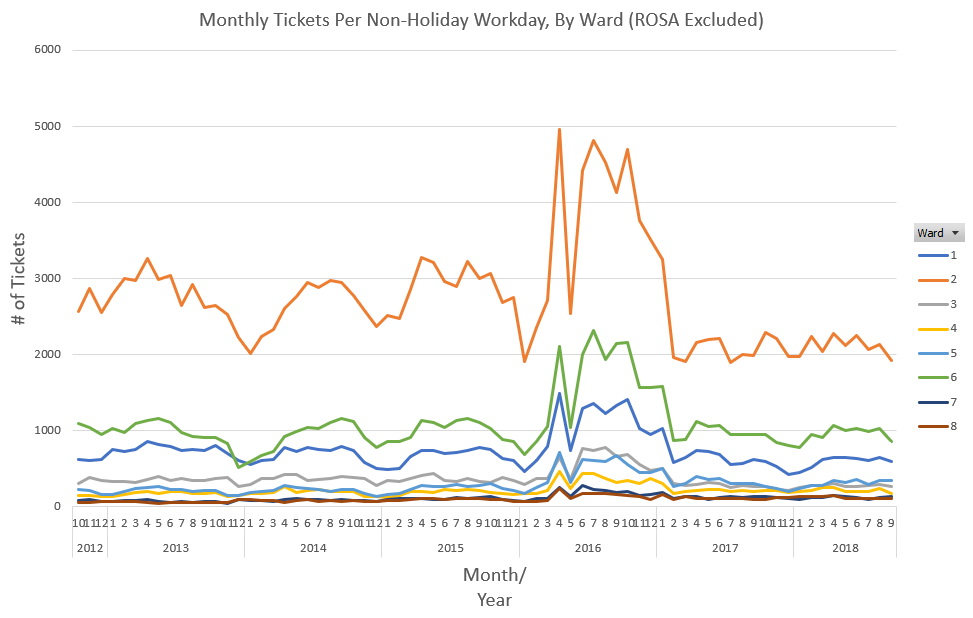 Above is the raw count of non-ROSA parking violation, the last three months you’ll see a slight dip in tickets in September but mostly a stasis in the last four months. Also plainly evident here was the huge spike in tickets from March 2016 to December 2016. I still have no idea why that happened but clearly was a policy decision that was reversed. 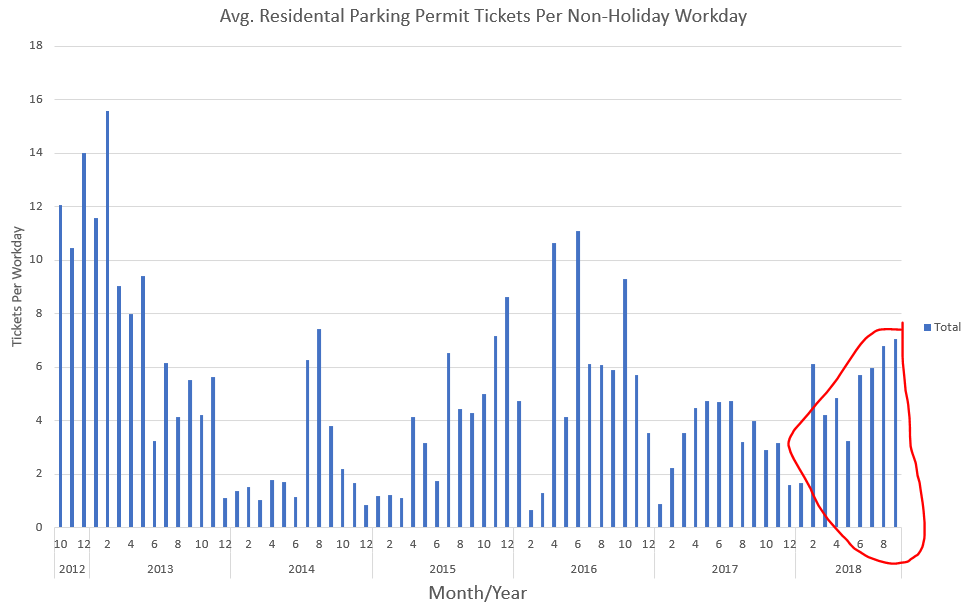 What you see city wide, however, was not the story in Hill East (For ease, I’m going to use ANC  6B06, 6B08, 6B09, and 6B10 combined). In this area you can see below that residential parking tickets increased steadily the last three months. Why? I think a combination of the ANC attention as well as, an oft overlooked aspect, 311 requests for enforcement. 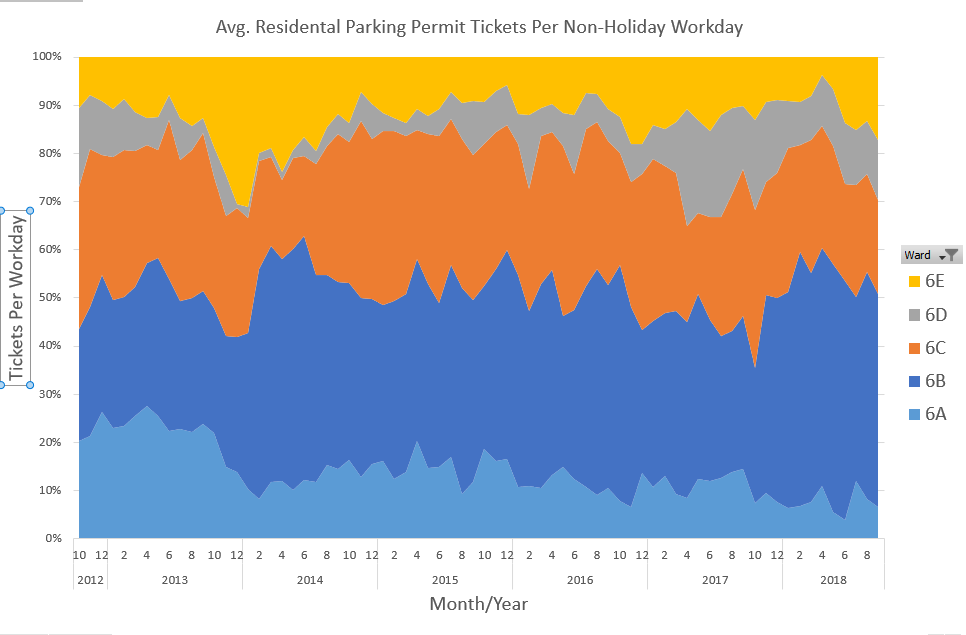 Here’s a look at a stacked chart showing the percentage of residential parking tickets issued in each Ward 6 ANC, by month. Look to the right. ANC 6B’s share of enforcement in ward 6 was mostly steady in the last three months. 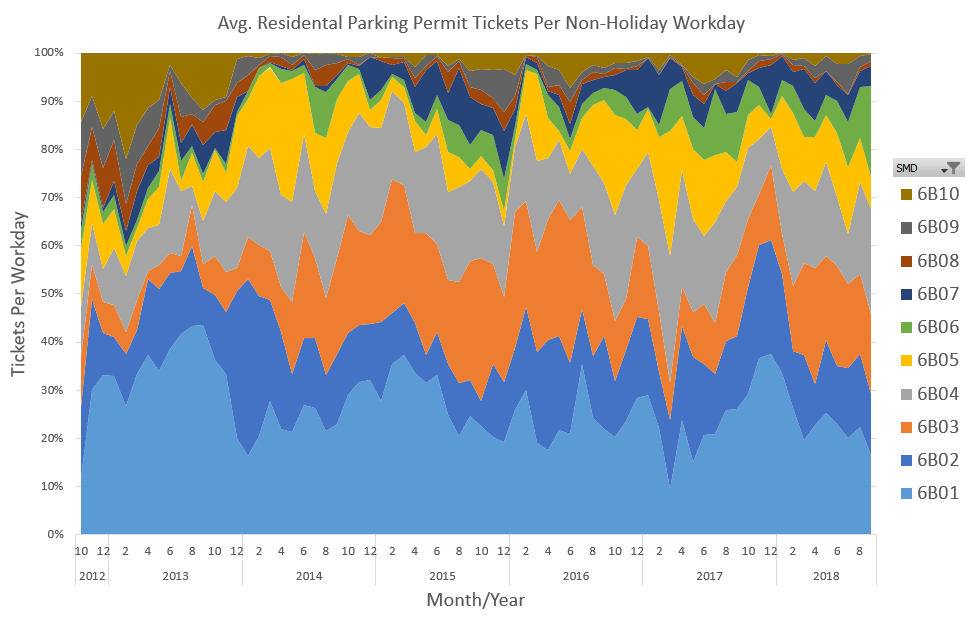 And here’s a look at tickets by SMD. ANC 6B06 had a noticeable increase in the share of tickets the last three months in ANC 6B. Sure, there’s lot of construction and opportunities for tickets, but that was true before this spike. What’s going on recently?

311 Requests: Do They Actually Work? 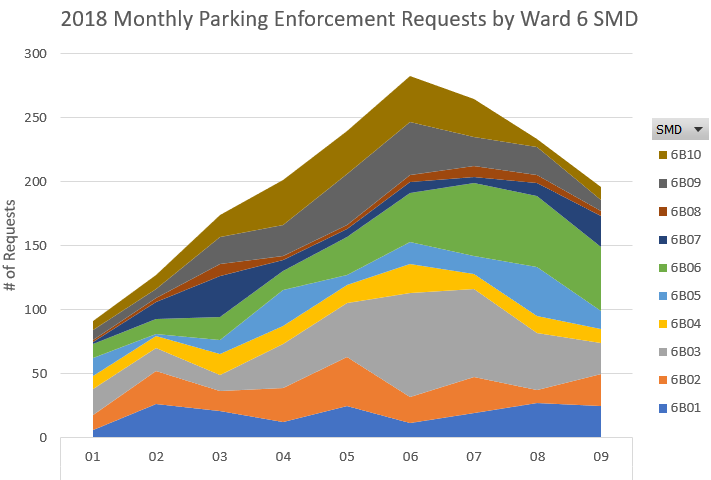 One of the things residents of DC constantly hear is to put in a 311 request for things that can’t be immediately resolved. For residential parking permit enforcement, this is often frustrating because most people don’t stick around for two-plus hours to see if enforcement actually occurred. However, with DC’s Open Data we can cross reference 311 requests and parking violations by SMD. Looking at this data for the first nine months of 2018, we can see an obvious spike in both residential parking violations and enforcement requests in SMD 6B06, starting in June. I think after looking at this data what I can tell the residents of ANC 6B06 and DC as a whole, is it seems like 311 requests result in more parking violations. As in so much else, the squeaky wheel wins again. However I must caveat, this is small amounts of data over a small amount of time. As I move forward as an ANC commissioner, I plan to continue to use the 311 Requests Open Data to ensure city agencies are responding to and appropriately closing requests.